May 20, 2002
The Report has finally been received, two years and two months after our mother’s death. See full PDF version below. In a nutshell, the Classification of the death was ‘Accidental’ as opposed to ‘Natural Causes’ and the Cause of Death was “Ischemia and Infarction of the bowel and brain due to prolonged postoperative oxygen de-saturation and hypotension.” The following ten issues were found to be significant:

Recommendations and request for response were sent to the Department of Anaesthesia & PACU at Chilliwack General Hospital; Patient Care Services at Chilliwack General Hospital; Mona Kines, Vice President of Acute and Strategic Services; Dr. Rod Underall, Chief of Medical Staff of the Fraser Valley Health Region; Laurel Brunke, Executive Director of the RNABC; and Dr. T.F. Handley, Registrar of The College of Physicians and Surgeons of BC. We are hoping that now there is an ‘official’ accounting of what happened February 20th thru March 5th, 2000 someone will let our family know what, if anything, has been changed as a result of Esther Winckler’s untimely death. 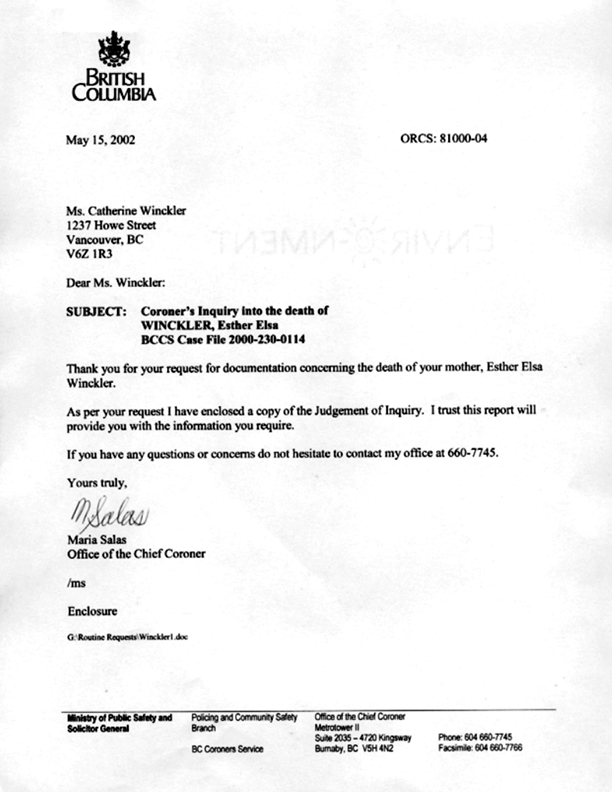